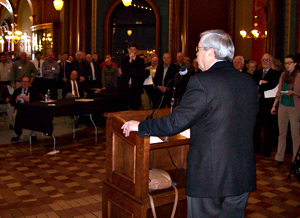 A fight is brewing among Republicans over the state gas tax. The chairman of the Republican Party of Iowa issued a statement today, saying Republicans should “take the lead” in opposing an increase in the gas tax.

But Republican Governor Terry Branstad says if legislators pass a plan that reduces commercial property taxes, he would approve an increase in the state gas tax, although the governor calls it a “user fee.”

“The tax is a tax that you get stuck with whether you do something or not. A user fee is you pay for using the roads,” Branstad told reporters this afternoon. “That’s the difference.”

About 200 officials from counties and economic development groups gathered at the statehouse today to rally for a gas tax hike. Branstad acknowledged Iowans are facing a “price squeeze” at the pump as gas prices have skyrocketed in the past several weeks.

“That’s the reason why I’ve said once we’ve passed permanent property tax relief…we can then tell the people of Iowa, ‘Yes, you can pay a higher user fee along with that to help us build the infrastructure of the state of Iowa,'” Branstad said. “And I believe that is something that can gain legislative support.”

Scott Newhard of the Associated General Contractors of Iowa said the “user fee” on gasoline and diesel fuel is paid by all drivers, including out-of-staters who are driving through on Iowa roads.

Representative Josh Byrnes of Osage, the Republican chairman of the House Transportation Committee, supports an increase in the gas tax.

“We’ve got to do something,” Byrnes said during brief remarks at the rally. “They’re not going to fix themselves. There’s no magic involved here and we’re simply just kicking the can down the road if we don’t take and do something about this.”

Lyle Brehm, the county engineer for both Tama and Poweshiek Counties, said he and other county engineers are struggling to keep roads and bridges passable with a budget that hasn’t grown since 1989 — the last time the state gas tax was hiked.

“He failed to point out that Ronald Reagan increased the gas tax, called for a gas tax increase and did it by acknowledging that maintaining our road system is the responsibility of government,” Scott said. “Mr. Spiker, you’re no Ronald Reagan.”

Supporters of the gas tax increase gave legislators a fact sheet with the headline “It’s Time for a Dime!” — and a dime was glued to the top of it.

Text of Spiker’s letter is below:

Iowa’s legislative session is in full swing, and there are a flurry of bills being submitted and proposed.

I believe it’s important Republicans band together and be the clear party of limited government and lower taxes.

That’s why I’m certain Republicans should take the lead on opposing an increase in the fuel tax.

Over the last few weeks there has been some indication an increase in the gas tax may be making a comeback.

Each time this issue has been brought up, it has been overwhelmingly rejected by the people of Iowa, especially Republicans.

And a poll conducted only a few months ago by the Republican Party of Iowa showed a clear, substantial majority of Republicans oppose raising the gas tax.

The Republican Party of Iowa’s platform is very clear on this issue. It states, “We oppose any increase in fuel taxes.”

Most Iowans see raising the gas tax as an unnecessary increase when the state is currently holding a budget surplus of nearly one billion dollars and hardworking families are struggling to make ends meet.

Further, it has been reported by AAA that gas prices are at record highs for this time of year and the last thing Iowa families need is the government taking more of their hard-earned money at the gas pump.

We strongly encourage all our elected state representatives to soundly reject this misguided tax increase that will hurt hardworking Iowans, should it ever be brought up for discussion.

P.S. The Republican Party of Iowa is committed to opposing any increase in fuel taxes, especially in the middle of a recession when Iowans are struggling to make ends meet. “The Problem is not that people are taxed too little, the problem is that government spends too much.” – Ronald Reagan