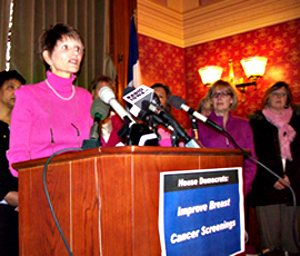 A group of breast cancer survivors is urging a House committee to take up legislation that would require mammogram reports to disclose the density of breast tissue.

Bridget Pargulski of Johnston homemaker, says for four years in a row her cancer was missed in her mammograms because her breast tissue was dense.

“Cancer on a mammogram shows up white and so does dense breast tissue. That’s why you can’t see it. Even large tumors — tumors as large as five centimeters — will not show up on a mammogram if it’s clouded by this dense tissue. I didn’t know that,” Pargulski says. “When I got my mammogram report every year and it said normal, I thought that meant I did not have cancer. Now I know that’s not what it means and woman have a right to know that.”

Pargulski says if women are told their breast tissue is dense, they can take other steps to check for tumors. Patricia Ripley of West Des Moines is another breast cancer survivor who backs the bill.

“I thought I was doing everything right by having annual mammograms,” Ripley says. “They would tell me my breasts were dense, but I didn’t know that mammograms don’t always find the cancer.”

Representative Helen Miller, a Democrat from Fort Dodge, is the bill’s lead sponsor and it’s modeled after laws in four other states.

“The only rationalizations that I’ve heard in opposition to this bill basically are that the language is prescriptive, number one, and, number two, the physicians don’t like being told what to do,” Miller says. “Having been married to a physician for over 40 years, I can honestly say: ‘They can get used to it.'”

The Iowa Medical Society and the Iowa Academy of Family Physicians are opposed to the bill. An Iowa City doctor who is a member of the Medical Society’s board of directors says there is “no consensus in the scientific community on the relationship between breast density and cancer risk.” According to Dr. Marygrace Elson, if the bill becomes law women will be unnecessarily “frightened” into seeking additional breast cancer screenings which are not medically necessary.  The doctor also says there is no “uniform method for assessing breast density.”

The bill about mammogram reports must clear the House Human Resources Committee this week, or it is ineligible for debate for the rest of the year.