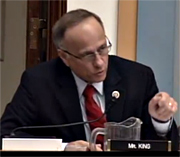 Iowa Congressman Steve King, a Republican from Kiron questioned the director of the U.S. Immigration and Customs Enforcement (ICE) about the release of over 2,000 illegal aliens by the Obama administration.

“When you looked at your options, of releasing these 22-hundred and 28 into the street — of which 629 are criminals — what was the rationale? If you needed to free up your budget, why didn’t you just go ahead, those who were adjudicated with deportation, remove them?,” King asked.

“We’re doing everything we can to remove people. So I don’t believe there were any removal cases that were ready to go that we delayed on,” Morton responded. King followed up asking, “But why didn’t you accelerate that as another option rather than releasing people into the streets?” 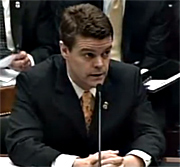 Morton then replied,”We go as fast as we can, I’m not aware of any power that we had to accelerate.” King pressed the question again to Morton.

“Did you consider that as something you might want to develop, an ability to accelerate the removal so that you could free up your budget and not people into the streets,” King said. “I am a supporter of trying to make sure that immigration proceedings proceed in a timely fashion, we have a number of proceedings that take too long,” Morton replied.

King has been an outspoken opponent of the administration’s immigration policy.