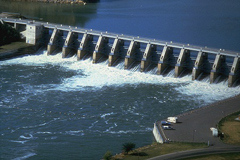 A key Missouri River dam was put through another series of tests last week to determine if it suffered any serious damage during the 2011 flooding.

Dave Becker, operations manager for Gavins Point Dam near Yankton, says new measuring devices were planted in the spillway concrete that provided a host of data.

“Our people in Omaha are looking at it as well as some consultants to determine what the long-range future is for the spillway,” Becker says.

“It’s operating fine and it can really do anything we need it to do right now but they’re not entirely sure what needs to be done to the spillway in addition to that.”

Water releases from the dam were ramped up and down over several days last week. Becker says experts from the U.S. Army Corps of Engineers are still studying the results.

“They’re putting all that data together,” Becker says. “They’re putting the ground-penetrating radar together. The holes they’ve drilled over the past year, they’re going to be looking at all of this pressure data to really understand the base under that concrete but the concrete is in excellent shape.”

Becker says they were able to do some cleaning out just below the dam, too, removing some 2,500 tons of debris. It’s feared record flows from the dam two summers ago may have eroded some of the gravel frost blanket under the spillway.