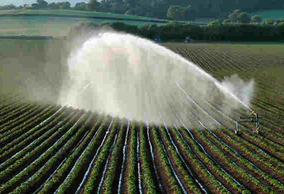 Today marks the 20th anniversary of World Water Day, as Iowans are encouraged to consider our “water footprint” and to think of ways to preserve and conserve the finite water supply.

Two-thirds of the planet’s surface is covered by water, but only about one-thousandth of one-percent of that water is fit for us to drink.

Most of that fresh water is devoted to farming, according to Danielle Nierenberg, co-founder of the Food Think Tank. “Around 70% of all fresh water is used in agriculture,” Nierenberg says.

“Finding ways for farmers to get more crop per drop is really important, especially as climate change takes a bigger hold on not only places like sub-Saharan Africa but also here in the United States.”

No one’s more keenly aware of the vital need for water than Iowa farmers, after last year’s devastating drought, which hasn’t yet gone away.

Some would be surprised to hear that seven-tenths of the planet’s water is now being dedicated to agriculture, but Nierenberg says that’s an accurate figure. “Seventy percent of our water is a huge amount and it all goes into the crops that people eat as well as the crops that are used for things like ethanol, for livestock production, for all aspects of the food system,” Nierenberg says.

“It’s really important for farmers to come up with ways to make sure they’re using that water effectively.” Some of those ways includes employing drip irrigation, not spraying, and harvesting more rainwater for use on crops and in our homes.

She says, “Farmers in places like sub-Saharan Africa and Latin America, for example, are using agro-forestry, the practice of incorporating trees along with crops, can really help keep water in soil, can provide shade for crops.” Intercropping is also helpful, Nierenburg says, planting multiple crops at once so there’s a back-up to depend on if one fails.

Diversifying farms by including cover crops and intercropping helps keep nutrients and water in the soil, protects plants from drought, and ensures every drop of water delivered by rainfall or irrigation can be utilized. Nearly a-billion people suffer from hunger and more than two-point-three billion live in water-stressed areas, she says.

Understanding the global food system and making smart, sustainable changes in the way we eat and produce food now, Nierenburg says, can help prevent both famine and thirst in the future.