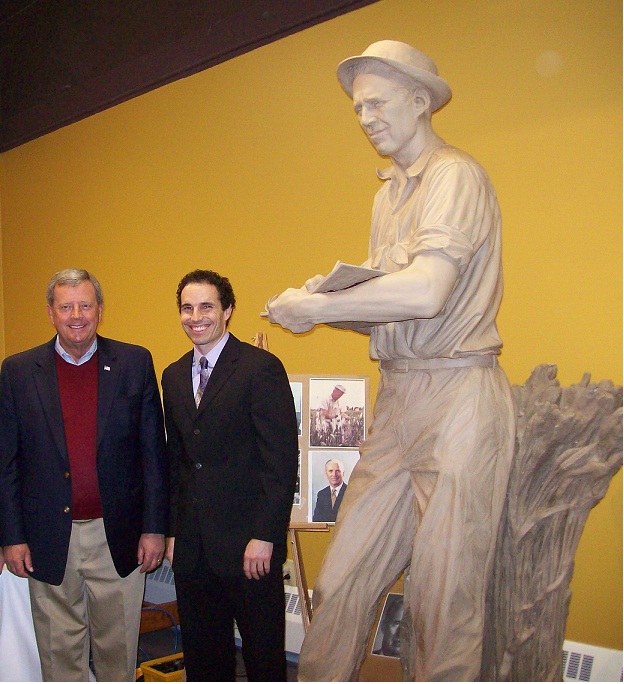 The artist who’s sculpting an image of Iowa native and Nobel Peace Prize winner Norman Borlaug is working on the statue in public this week.

Ben Victor is creating the model that will be used to make a bronze statue and he set up shop last week in a studio inside the State Historical Building in Des Moines.

“I’ve had a great group of visitors and school children and everybody that’s been interested in the project and I’m encouraged to hear the stories and hear people come in that knew him and also people that have studied him and his life,” Victor said this morning during a news conference.

“And to me that’s really what this project has been about and what it continues to be about is to get Norman Borlaug that platform that he deserves for all his research and all the wonderful things he did in saving so many lives.”

Borlaug, a native of Cresco, Iowa, won the 1970 Nobel Peace Prize for his work in developing new strains of drought resistant wheat. Iowa lawmakers voted a few years ago to rotate Borlaug’s likeness into one of two slots the State of Iowa has in the U.S. Capitol for statues of famous Iowans.

Victor has chosen to depict Borlaug at work in a wheat field.

“When I was going through the process of creating the piece it was interesting ’cause there are a lot of photos and a lot of video of Dr. Borlaug and so I got to kind of spill through that and get into his character and I created probably, actually, (model) number five, which is kind of over the top,” Victor said, “but I was passionate about getting it right.”

Congressman Tom Latham helped spearhead the effort to get Borlaug’s statue in the U.S. Capitol and he’s pleased with the image Victor has developed.

“What a great job you’ve done,” Latham told Victor this morning. “This is just a perfect likeness and anyone who knew Dr. Borlaug — you’ve captured him. You really have.”

Victor’s design, which is still being tweaked, will be similar to an iconic photo showing Borlaug standing in a field of wheat, taking notes in a notebook.

“Through all the photos, I thought: ‘Man, that is the character that captures the man,’ but I didn’t want to include the wheat all the way around the figure because then it kind of relegated it to a glorified bust and so it seemed right to put the wheat behind him so it’s a part of who he was, but it’s not so it’s not overtaking the figure itself,” Victor said. “And so that’s kind of how I arrived at the design and, lucky for me, the committee liked it, too.”

Today is the 99th anniversary of Borlaug’s birth in Cresco. Borlaug’s statue is set to be dedicated and installed in the U.S. Capitol on his 100th birthday. It will replace a statue of James Harlan, a Civil War-era politician from Mount Pleasant.

AUDIO of governor’s weekly news conference, the first portion of which focused on Borlaug statue.