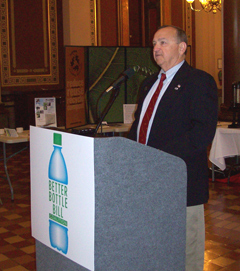 A coalition of recycling businesses and environmental groups is urging legislators to expand the Iowa “Bottle Bill” to include bottles of non-carbonated beverages, like water bottles.

“This is what we’re throwing away every day — 33,000 tons of plastic bottles that have a value, that don’t need to be in the landfill,” says Mick Barry, the former owner of an Iowa recycling company.

Under Iowa’s Bottle Bill, consumers pay a five-cent deposit fee on each can or bottle of pop, beer or wine and then they can redeem those nickles by returning the empties.

Barry says that means hundreds of thousands of bottles aren’t being recycled through the Bottle Bill process.

Senator Bob Dvorsky, a Democrat from Iowa City, is sponsoring a bill in the Senate that places the nickel deposit fee on bottles containing water, sports drinks and iced tea.

Past attempts to expand the Bottle Bill to include water bottles and sports drinks have failed. Dvorsky says supporters of the bill are going to have to start convincing legislators to act.

“I’m not certain what its prospects are,” Dvorsky says. “I think we have to give it the best shot we can.”

Ruth Comer, a spokeswoman for the Hy-Vee supermarket chain, says expanding the Bottle Bill to include more containers is not the best way to deal with littering and landfill issues.

“There are better, more modern alternatives that should be explored that recycle more materials and don’t result in garbage being brought into grocery stores,” Comer says.

The state’s grocers have tried in past years to get rid of the Bottle Bill, arguing it’s a risk to food safety to bring empty cans and bottle back to the grocery store. The bill to expand the Bottle Bill to include non-carbonated drink containers does call for the companies that bottle the beverages to pay a bit more to retailers like Hy-Vee.

“The handling fee is not a concern of ours. At Hy-Vee, we don’t want more money for handling these containers being brought into the store,” Comer says. “We want to get them out and into the rest of the solid waste stream.”

An Iowa State University economist conducted a study of the Bottle Bill in 2011. He concluded about 85,000 tons of beverage containers are being recycled because consumers returned them for the nickel deposit fee. Recycling businesses made $37 million in 2011 from those recycled containers and retailers were paid $17 million to handle cans and bottles of pop, beer and wine. About 16 percent of Iowans do not return cans and containers to redeem the nickel deposit.