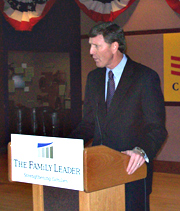 The leader of an Iowa group that has fought against same-sex marriage spoke at a rally in Washington, D.C. today as the U.S. Supreme Court takes up two cases involving gay marriage. Bob Vander Plaats , the president of THE FAMiLY LEADER, says it’s time for the court to step up and protect marriage.

“Ladies and Gentlemen, America needs leadership today,” Vander Plaats said. “Quite frankly we are here at this moment because too many leaders, too many moms and dads, too many teachers, too many pastors and churches, too many politicians and elected office holders, backed away from the microphone when it was their turn to speak.”

Vander Plaats talked about the Founding Fathers of the nation, Evangelist Bill Graham and the Pope in saying that traditional marriage is what should be the law in the U.S.

“Now we all know that it is the norm for politicians to toss about from poll to poll and from wave to wave and put their finger in the wind,” Vander Plaats says.

“But what we want the Supreme Court to do is look to our founders, look to the wisdom of Bill Graham, look to the wisdom of Pope Francis, not to the perpetual posturing of politicians and define marriage once and for all as a union between a man and a woman.” Vander Plaats told the crowd the Iowa Supreme Court’s ruling that overturned the state law banning gay marriage created a “credibility chasm” between the people of the state and the court that continues today.

He said the U.S. Supreme court risks creating the same problem. “Usurping the people’s voice and vote will send a constitutional shiver down America’s freedom spine. And it will be the height of judicial overreach, where all of us will know that all of our freedoms — no matter which one you hold very dear — is now up for grabs to an unelected court,” Vander Plaats says.

The U.S. Supreme Court is hearing arguments in two gay marriage cases. One involves the federal Defense of Marriage Act, and the other involves California’s Proposition eight — the state constitutional amendment that limits marriage to one man and one woman.