You are here: Home / News / State Auditor resigns, to become chair of national board (AUDIO) 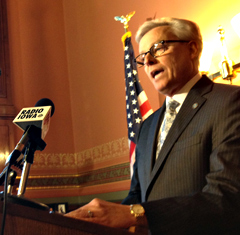 Auditor Dave Vaudt announced he is resigning to take a new job.

There was a surprise announcement at the statehouse this morning. State Auditor Dave Vaudt is resigning as of May 3 to become chair of the Governmental Accounting Standards Board.

“I have accepted an incredible opportunity which I simply could not refuse,” Vaudt told reporters during a news conference in his statehouse office.

Vaudt will move to Norwalk, Connecticut in mid-May, work for six weeks with the current board chairman, and then take over on July 1. The board sets the financial accounting and reporting standards for state and local governments.

“I have to tell you this is a bittersweet time for me,” Vaudt said. “It has been truly an honor and a privilege to serve as Iowa’s auditor for the last decade.”

Vaudt, who is a Certified Public Accountant, worked for KPMG for 25 years before entering politics. As chairman of this national board, Vaudt said he will no longer be involved in Republican Party politics. Vaudt, who is 59, said this is a “great way to wrap up his professional career.”

“I see this as a pathway for me to make a huge impact nationally,” Vaudt said. “…Definitely a unique opportunity — a seven year term — and I’m looking forward to that opportunity.”

Late last year Vaudt was encouraged to apply for the job, and he found out Wednesday it was his.

“In the CPA world, this is probably one of the top positions you can get as far as having an impact on accounting and reporting,” Vaudt said.

Vaudt is an Iowa native.

“Born and raised in Iowa, actually graduated from the small high school — Lu Verne Community High School in north central Iowa — and then attended Upper Iowa University in Fayette,” Vaudt said. “This is kind of one of those ‘small town Iowa boy’ stories that I’ve been able to first land a job with the large, international accounting firm KPMG, then become elected State Auditor and then now the opportunity to serve nationally on the Governmental Accounting Standards Board.”

Governor Terry Branstad will appoint a replacement to serve out the rest of Vaudt’s term. Vaudt was first elected in 2006 — the only Republican to win statewide office that year. He was reelected in 2010 for a term that ends in 2014.