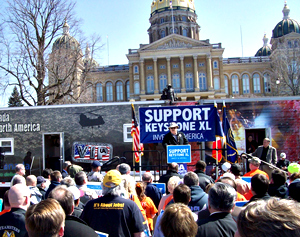 Union workers held a rally at the statehouse today to show support for construction of a pipeline from the tar sands of Canada through the Midwest.

Rick Tervin — the executive vice president of the United Plumbers, Fitters, Welders and HVAC Service Techs — spoke to the crowd.

“What we don’t want is our good friends in Canada shipping this oil to China or another Mideastern country. That’s not good for us,” Tervin said.

“…To make matters worse, what I see happening if that happens is it will most likely be sold back here to us at an even higher cost. If that’s not an insult, I don’t know what is.” 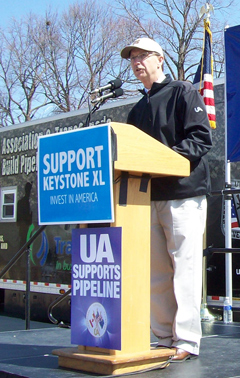 “Hell no we shouldn’t put up with it,” Tervin said. “We should continue to move this project forward and I can tell you this: America needs this oil and we need it now.”

Andy Roberts of the United Association of Plumbers and Steamfitters Local 33 in Des Moines said many of the nation’s existing pipelines need to be replaced and the construction trades are ready to go to work.

“You look around here — there’s bricklayers. There’s electricians. They’s carpenters. There’s elevator guys back there. They’re neighbors, really. That’s what we all are is neighbors and infrastructure — both vertical and horizontal — is something that we desperately need to invest in,” Roberts said. “We can’t afford not to anymore.”

Union officials cited a report from the Canadian Energy Research Institute indicating that in the next 25 years Iowans would earn $465 million in wages and benefits as a direct result of the pipeline’s construction and operation.