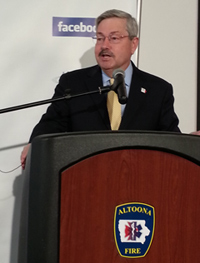 Governor Terry Branstad traveled to Altoona today to make the official announcement that social media giant Facebook will be building a $300 million data center in the Des Moines suburb.

Altoona Mayor Skip Conkling made the opening statement at a news conference at Altoona City Hall.

Conkling said the city and state negotiated with Facebook officials for roughly a year and a half without spilling news of the massive project.

“The negotiations weren’t easy. They were…I would say one of the more prolonged ones I’ve been involved in,” Branstad said. “But, all’s well that ends well. We’re so excited to win a prize like this. I mean, Facebook is certainly a well-known name and is one of the exciting, modern success stories. We’re so proud they’ve chosen Altoona.”

Facebook currently has two other data server farms in the U.S. – located in Prineville, Oregon and Forest City, North Carolina. The first phase of the project in Altoona will involve a 476,000 square foot data center utilizing an outdoor-air cooling system.

Jay Parikh, vice president of infrastructure engineering for Facebook, said two more data centers could eventually be built on the 194-acre site in Altoona. He expects 31 people will be employed at the data center when the first building opens late next year or in early 2015. 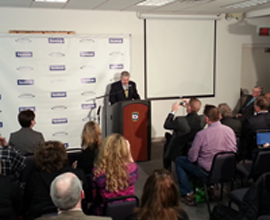 “In Prineville, Oregon, we have 70 full-time workers at the data center. In Forest City (North Carolina), we have about 80 full-time Facebook employees,” Parikh said.

“I think 31 (workers in Altoona) is our minimum commitment, but if you look at the other regions, you’d probably be able to guess that we’ll go higher.”

In his closing remarks, Branstad said Facebook played a role in his decision to seek another term as governor in 2010.

“A few years ago, I was happily serving as the President of Des Moines University when it was brought to my attention that a couple of law students at Drake University started a movement on Facebook to draft me to run for governor again,” Branstad said, laughing.

“First of all, Facebook didn’t exist when I was governor before and (the Drake students) weren’t old enough to vote.” Branstad previously served as Iowa’s governor from 1983-1999. He was President at DMU from 2003-2009.

The IEDA Board today also awarded direct financial assistance and tax benefits to four other projects in Clarion, Lime Springs, Independence, and Council Bluffs.
Here is more information on the IEDA’s actions today: