You are here: Home / Health / Medicine / Utah girl has surgery in Iowa to get back her smile (audio)

A Utah teenager is the first person to undergo a surgery in Iowa that creates a smile. Radio Iowa’s Dar Danielson talked with the girl and her family.   Audio: Dar Danielson report 1:31. 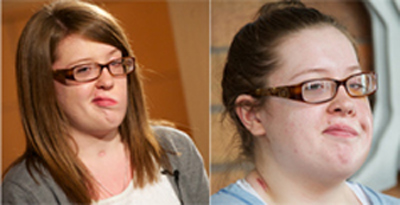 Fifteen-year-old Natalie Wright, of Provo, Utah had undergone several surgeries for a brain tumor. One of the results of those operations was complete facial paralysis. Wright wanted to get her smile back and learned that Dr. Doug Henstrom of the University of Iowa Hospitals and Clinic had performed what’s called “pediatric facial reanimation surgery” at two other hospitals.

She traveled to Iowa where she underwent the two-part procedure that first involved taking a nerve from her ankle and using it to connect nerves in the right and left side of her face. Then came step two where they took a muscle from her thigh and connected the muscle on her left side to the nerve, so the muscle will move and she’ll have a smile.

Wright says it takes some time before everything works exactly how it should, but there was an immediate impact from the surgery. “Because of the muscle and how they have to stretch it, it actually left me with a permanent kind of resting position that’s a lot better. It looks lots better than it did before,” Wright explains.

“But it will take about six months for the muscle to actually move and to act normally like it should so I can move it around.” Natalie’s mother Dana says her daughter has handled all the medical challenges very well, and now she will be able to express herself the way other people do.

“I think Natalie had come to accept who she was, I know she had. She knew she couldn’t smile like everyone else, but she has a lot of faith and a lot of determination and she kind of knows her journey has been different than everyone else’s,” he mom says. “For her to be able to have the surgery has just been enormously wonderful for her, because she always says ‘now people can see on the outside how I feel on the inside’.”

Her dad John says the surgery has been a lift for all of them. “Most of the neuro surgeries have been life threatening. What’s been really great about this surgery is that this is life enhancing. So this is making a difference to Natalie’s life instead of just saving a life,” John says.

“For the surgery it’s been a little bit refreshing for us as parents, but for Natalie it is something that really starts to help her improve her life, especially as a 16-year-old.” Natalie agrees it is a good present to mark turning 16.

“Yeah, it’s really exciting, the doctor is awesome, it’s been really crazy and wonderful,” She says. Natalie says the tumor that caused the problems in the first place has not been growing since she was 10. And now she looks forward to seeing how her new smile develops in the months ahead.