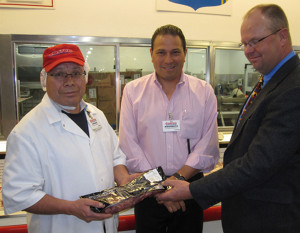 The number of cows being raised for beef in Iowa is at its lowest level in 60 years, but producers are expecting to add to their herds as the drought eases.

Rehder represented the Iowa Beef Industry Council last month as part of an Iowa meat trade mission to Mexico, El Salvador, and Honduras. He says there are some big challenges for Iowa beef in the latter two countries.

“The biggest issue is the price of beef and we informed them, because of low numbers, that’ll be an issue for quite a while,” Rehder said.

“Our inventory of cattle is the lowest it’s been since 1952 and coincidentally, Mexico, El Salvador, and Honduras are enduring the same problem.”

The six-day trip in April marked the first time a representative of the Iowa Beef Industry Council has visited El Salvador and Honduras. Rehder noted the countries are already importing high quality beef for the people who can afford it.

“As far as increasing the market for the more poverty stricken people, that’s where we need the price of beef to come down a little bit so it can be more competitive,” Rehder said. “The infrastructure is there and I really believe…we have the opportunity to increase exports down to those countries.”

During the trade mission, the Iowa delegation toured processing plants and retail supermarkets. Rehder said many of the people he met are hoping to attend the World Beef Expo in Wisconsin in late September.

“I plan on being there and meeting up with a few of them again. Just making contact and having people from Iowa come down to see them…they were really impressed by that,” Rehder said. The Central American Free Trade Agreement allows U.S. Choice and Prime beef to enter both El Salvador and Honduras without a tariff, because it does not compete with their own grass-fed beef.