You are here: Home / Sports / Former leader of IGHSAU hailed as a visionary 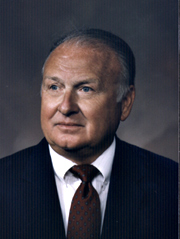 Iowa governor Terry Branstad called E. Wayne Cooley a visionary for girls sports. The former long time executive secretary of the Iowa Girls High School Athletic Union died over the weekend at the age of 90. He took over the union in 1954.

“He made it phenomenally successful. I believe that we had better attendance at the girl’s state tournament than the boy’s state tournaments at that time. He also helped develop girl’s softball and many of the other sports that we now have,” Branstad says.

Branstad says under Cooley’s leadership girls sports spread from the rural schools to the larger communities in Iowa.

“When I was in high school we didn’t have girls basketball in Forest City, but a lot of schools did…under E. Wayne Cooley, they brought it to a whole new level,” Branstad says.

Iowa lieutenant governor Kim Reynolds was a high school forward for the girls basketball team at Interstate-35 high school in Truro and says getting to the state tournament was and still remains a big deal in small town Iowa.

“So it was a great, great opportunity for small communities all across the state of Iowa. Really just the recognition and the excitement and the national attention. Iowa led the way on it, and I really appreciate all that he did for that,” Reynolds says.

Cooley was also known as a promoter. Lisa Brinkmeyer was the star forward on the Hubbard-Radcliffe team that won the final six-player state championship in 1993. Brinkmeyer now works for the girls union that Cooley led for 48 years until his retirement in 2002.

“He really did put on a show, he showcased the ladies, made it extra special for all of us who put so much into getting to the state tournament. And it wasn’t just a basketball game, there was so much pageantry that went into it,” Brinkmeyer says. She says she will never regret the time that she put in to get to the state tournament.

A memorial service for Cooley will be held Tuesday morning in Des Moines.