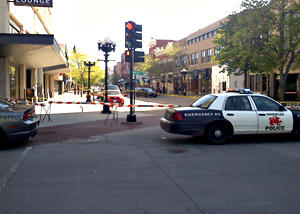 The DCI is investigating after a man was shot by Waterloo police at this downtown intersection.

State officials are investigating an officer-involved shooting in Waterloo overnight. Shortly after 1 a.m. today, Waterloo police officers were dispatched to a downtown city intersection on the report of a man with a knife.

Police say one of the arriving officers shot the man after he threatened them with the knife.

The man was taken to a local hospital for treatment. A Waterloo police spokesman says the man underwent surgery and is now recovering from non-life-threatening injuries.

Police have not released the man’s name or identified the officer involved in the shooting.

A DCI team has been on the scene most of the morning investigating the incident.