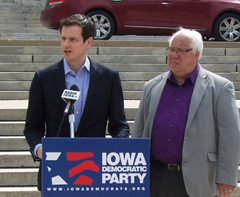 The Iowa Democratic Party’s chairman is embarking on a three-day tour of the state to tout the compromises Democrats and Republicans struck to end the 2013 legislative session.

“Compromise means that everybody got some of what they wanted,” Olson said this morning. “I think when you look at the total output of the session, Democrats really drove a hard bargain and ended up coming out ahead.”

Olson cited a tax credit geared to low-income Iowans and a new tax credit for all commercial property owners as bargaining successes for Democrats.

“These are not small things that we accomplished,” Olson said, “and I think they’re going to make Iowans’ lives better. I think it’s going to grow the economy, but you know there are definitely some things that Governor Branstad wanted that ended up in those final compromises as well.”

Olson has said he’s pondering a run for governor himself, but he deflected questions about a 2014 race during the tour’s kick-off event this morning on the steps of the state capitol in Des Moines.

“I’m focused now on highlighting the accomplishments that Democrats had during the last legislative session and it really is — that is a big job because we had a number of big successes, making sure that middle class Iowans are getting a fair shake,” Olson told reporters. “That’s a decision that I’ll make another time and just today is not that day.”

Olson is due to speak at the Sioux City Public Library at three o’clock this afternoon. He’ll be at the Cerro Gordo County Courthouse in Mason City at 9:30 Thursday morning before a noon-hour stop at the Black Hawk County Democratic Party headquarters in Waterloo. Later Thursday afternoon Olson will visit Cedar Rapids and on Friday morning he’ll wrap up his statewide tour with a stop at the UAW Hall in Dubuque.