You are here: Home / Military / Pilots dealing with loss of F-16 flight time 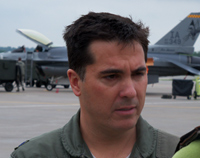 The Iowa Air National Guard base in Des Moines is slowly moving from flying manned fighters to unmanned drones.  Radio Iowa’s Dar Danielson talked to a couple of the pilots about the change.

The 132nd fighter wing began flying observation planes in 1941 and through the years advanced with the changes in air power to fly such planes as the P-51 Mustang, the the F-100, A-7 and now F-16.

Squadron commander, Lieutenant Colonel Travis Acheson of West Des Moines, admits the thing he will miss the most is this rush of the fighter jet and “going 800 miles an hour with your hair on fire.”

He says he’s lucky to have had the chance to fly fighters in his career, and will now will stay in Des Moines and fly the unmanned M-Q-9 Reaper. “You’ve been handed the keys to the ultimate sports car and you’ve gotten to fly for 20 years, and now they’re simply saying, okay, sports cars are becoming a thing of the past, and technology is really evolving to something that’s really neat and cool,” Acheson says.

He says the technology has really surpassed jet fighters, and with the new mission, he can stay in Des Moines and won’t have to deploy. 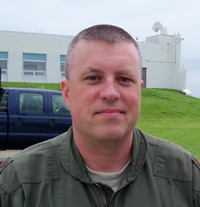 . “Overall probably a lot of disappointment, pilots want to fly that’s what we do,” Pierce says of his feelings about the changeover, “a number of the pilots have chosen find other units to go fly with — taken jobs with other air national guard units in other states. The rest of us, we are here to stick it out, that’s what we’re going to do.”

The new mission means new training for Pierce and Acheson.

“Everybody, even a current and qualified F-16 pilot, has to go to school to learn how to fly the R-P-A,” Acheson says. He says they can take the new training in either New York State or New Mexico. The changeover means the Iowa pilots staying here will each get a last ride in an F-16. Acheson already had his.

“You know I remember telling my wife that I thought for sure that I would be crying my eyes out when I landed, but actually I looked back and reflect and I was really blessed that I got to fly in my hometown. I never had any issues, I never had to eject,” Acheson says. “This machine pulls nine G-s — it’s a beast. It has hurt many a very physical, athletic guy, gal, because of the pressure it puts on you. I never had any physical ailments, my back still works.”

The 21 F-16’s based in Des Moines will each eventually be flown to a unit in another state, with the changeover completed sometime this fall.