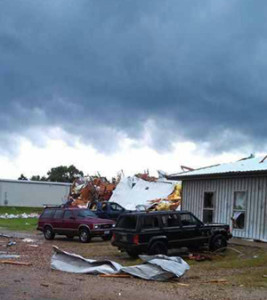 Cleanup is underway in north central Iowa after tornadoes touched down there late Wednesday afternoon.

Belmond city manager, Lee Ann Waltzing, says one of the twisters touched down north of the community, but everyone escaped harm.

“We didn’t have one injury, so we’re really thankful for that,” Waltzing says.

The results this time were much different than in October of 1966 when a tornado classified as an EF-5 killed 6 people and injured 712 while destroying much of the Wright County community.

Waltzing says there’s just some basic cleanup from this storm. “Inside the city limits we have trees and tree branches down that we’re removing and getting off to the side of the road until we can come back and actually remove them,” Waltzing says.

“It’s mainly outside the city limits were we had the damage.” Waltzing said Belmond experienced a power outage late yesterday afternoon and a nearby community is still without power.

“The town Goodell just north of us is without power, and so we have Highway 69 closed just north of Belmond,” Waltzing says. She says they closed the highway to allow power crews easier access to make repairs. The National Weather Service is working with city and county crews today to complete initial damage assessments and to assist in the clean up efforts.