You are here: Home / Education / Branstad’s Department of Education to crack down on early school start dates (AUDIO) 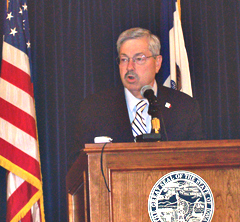 Governor Terry Branstad is directing the Iowa Department of Education to come up with new rules that would prevent school districts from starting school in the middle of August, or even earlier.

Current state law requires schools to start in the week in which September 1 falls, but districts apply for and receive waivers from the Department of Education to start earlier.

“I believe the Department of Ed is intending to move forward with new rules that would change this policy,” Branstad says. “I believe the present policy has been too lax and has not been fair to the tourism industry in Iowa.”

The tourism industry argues they lose millions when schools start early, as families stop traveling and teenagers quit their summer jobs at the swimming pool, resort or ice cream shop.

Branstad has met with tourism industry leaders to discuss their concerns and, after legislators have failed for years to pass a uniform school start date law, Branstad appears ready to have the executive branch of state government take action.

“They will go through the traditional rule-making process in making this change,” Branstad says.

That means the new school starting date standard won’t be in force until the 2014/2015 school year. It also means there will be statehouse hearings on the proposal and school officials are likely to protest as they’ve done with legislators, saying it should be a local decision left up to local officials.

Branstad was governor back in 1983 when he signed the law stipulating that schools should start as closely as possible to September 1st. In the past school year, all but eight of Iowa’s 348 school districts asked for and got a waiver to start earlier than August 27th — which would have been in the week September 1st fell in 2012.

Branstad made his comments at the end of his weekly news conference.