You are here: Home / News / Governor talks about money he cut from the budget (audio) 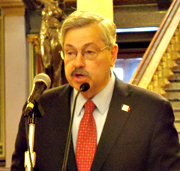 Governor Terry Branstad talked today about the items he vetoed from the budget in action last week. Branstad was asked at his weekly meeting with reporters about money he cut that would have been used to shore up the state employees retirement fund.

“I thought it was a successful session, we were able to resolve a lot of things. But I also feel a responsibility to the citizens and taxpayers of Iowa to make sure we are looking at the long-term financial health and well being of the state,” Branstad says. “And I believe that just throwing 109-million dollars into the pension system without doing significant reforms to that system was not a good use of taxpayers’ money.”

Branstad did not offer specific changes for the retirement system, “But I do recognize that these defined benefit systems have long been abandoned in the private sector and many companies have made the transition to a defined contribution system. I am not suggesting that we necessarily have to go that route in the State of Iowa. But I do think there needs to be thoughtful review of the systems and their sustainability for the long term,” Branstad says.

State Senator Rob Hogg, a Democrat from Cedar Rapids), issued a statement critical of the Governor’s item veto of 13-million dollars of mental health funding for counties. Branstad says it is a small amount compared to what the state has given counties in the past.

“Last year we passed a major redesign of the mental health system. And in the last two years the State of Iowa has put 115-million dollars of new state money into the mental health system. And, with our new health and wellness plan there will be significant federal dollars coming in January first,” according to Branstad. “So we believe the counties have been treated very fairly in this process.”

The governor also vetoed $7-million that was to be used for planning buildings at the three state-supported universities. “I think we need to recognize that changes are taking place in the way people learn. And rather than have a whole lot of buildings that are going to sit empty in future years, we need to really decide are these absolutely essential. These were sort of last-minute proposals that were put together. And remember, you spend the money for planning and the next year it’s going to cost a whole lot more when you fund the cost of it — or when you borrow money — which is even worse in my opinion,” Branstad says.

The governor says on-line learning has taken off and that has to be considered before any new buildings are built. “I just want to put out a cautionary flag that let’s just not say we’re going to charge forward and everybody that want’s a new building is going to get a new building,” Branstad explains.

“We need to carefully review and consider each of those on its own merits based on what the needs are. That’s something I am very willing to work with the regents as we go forward.” Branstad also pointed out that the University of Iowa is going to be putting over one-billion dollars into rebuilding facilities that were hit by the floods of 2008.

The Board of Regents issued this statement last week about the cuts:

“While the Board remains committed to each of these academic capital projects, we understand the Governor’s concerns.  To that end, at the August Board of Regents meeting, we will be reinstituting the Board of Regents Property and Facilities Committee.  Through the work of this committee, we will further develop our capital requests and again make the case to the Governor and General Assembly for these critical projects,” stated President Rastetter.