You are here: Home / News / Protest of “chained CPI” at Federal Building in Des Moines 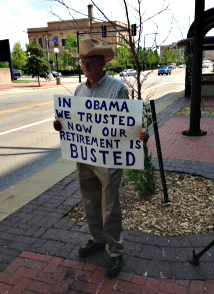 About 40 protesters holding a plastic yellow chain gathered in front of the Federal Building in Des Moines over the noon hour today.

They were there to rail against “chaining” future cost-of-living increases for Social Security to the Consumer Price Index.

“Chained CPI means that the government would change the formula it uses to calculate the rate of inflations,” said Jan Laue, president of the Iowa Alliance for Retired Americans, an organization that represents union retirees.

President Obama included the cost-of-living change for Social Security in the 2014 budget he presented to congress.

One of today’s protesters carried a sign that read: “In Obama we trusted, now our retirement is busted.” 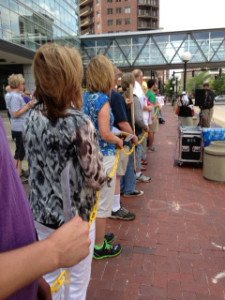 Protestors hold a yellow chain outside the Federal Building in Des Moines.

“I’m here today to fight for the retirement security of America,” Homan said. “…As I keep inching towards that Social Security mark, I’m more and more concerned.”

A group calling themselves the “Raging Grannies” led the crowd in song.

“Here we are: off our rockers and into trouble,” Maggie Rowen said.

One of their verses, written to the tune “This Land Is Your Land,” concluded that the proposal is a “cut that just won’t heal.”

According to the Congressional Budget Office, Social Security benefits would be about $3 per month lower in 2014 if the cost-of-living increase is linked or “chained” to the Consumer Price Index.

By 2023, the reduction would be $30 a month. The protesters at the Des Moines federal building say that means a Social Security recipient who is 65 today would get about $6000 less in benefits by the time they’re 80.