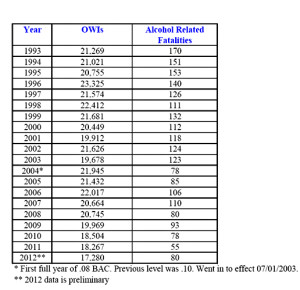 You’re guilty of drunk driving if your blood alcohol level is .08 or above today in all 50 states, but there’s a push to get even tougher — and Iowa’s governor isn’t ruling out the idea.

“We were at 0.13 (blood alcohol level) and then we went to 0.10 and now we’ve gone to 0.08,” Branstad says. “We have made significant progress in reducing drunk driving in the state of Iowa.”

In 1996, more than 26,000 motorists in Iowa were charged with “operating while intoxicated.”

“And there has been a continued reduction in the amount of fatalities related to operating motor vehicles under the influence of alcohol,” Branstad says.

Twenty years ago, 170 people died in traffic accidents in Iowa that involved an intoxicated driver. Last year there were half that many. In 2012, there were 80 alcohol-related traffic fatalities in Iowa, however that was 25 more drunk driving deaths than in 2011.

According to the National Transportation Safety Board, drunk driving is a “national epidemic” and about one-third of traffic deaths are caused by drunken drivers. The agency is calling for the dramatically low blood alcohol standard of .05.

“Whether this is an appropriate additional step of not, I think we’ll want to get more information and carefully review and study what kind of impact this would have,” Branstad says.

A blood alcohol test determines the volume of alcohol that is in a person’s blood. According to the American Beverage Institute, a .05 blood alcohol standard would “criminalize perfectly responsible behavior” like having a glass of wine with dinner.

Most countries in Europe and South America have the .05 blood alcohol standard for drunk driving.

Last year over 17,000 people were charged with driving in Iowa when their blood alcohol content was .08 or above.