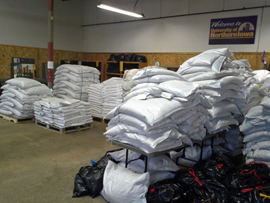 A program funded through the federal government and managed through the University of Northern Iowa in Cedar Falls provides Iowa counties with native grass and flower seeds to plant along the roadways.

Rebecca Kauten oversees the Roadside Vegetative Management Program, which she describes as putting native flowers and grasses back to work.

“Having them not only control some of the erosion that is happening, but also having those deep root systems to be able to not only hold the soil in place, but not require as intensive herbicide application as would normally happen with a warm season grass planting that takes a different type of maintenance — a little more intensely mowed, and in some cases fertilizers too,” Kauten says.

The seed comes in two mixes, one is called a “ditch clean out” mix that’s used when the counties go in and scrape out all the sediment from a ditch. “This mix is meant for some of your tighter soils, it sees a lot of action to put it simply,” Kauten says.

“And then there is a diversity mix as well, which has a higher concentration of wild flowers and a way to really enhance you habitat. There are some plantings that counties want to do that’re really showy and have a lot of color in the fall — and so they will use that diversity mix.”

Kauten says the plants that grew wild on the prairie before it was settled can have roots that go down seven to 12 feet. “You’re not only retaining the soil and water where these natives are planted, you are also enhancing the quality of the soil,” Kauten explains.

“As these root systems move through these tighter soils, a lot of times you are able to increase the porosity of the soil, so it is not only stable because you’ve got a root to hold that soil in place, you also have the ability for the water to infiltrate through that soil.” Retaining soil and water runoff is only one of the benefits of planting natives along roadsides.

“We’ve got the benefit also of being able to provide a food source and habitat for ground-nesting birds and for other species — pollinators especially — that are looking for nectar in plant species they don’t normally find elsewhere across Iowa,” Kauten says.

The program was awarded $255,000 this year for the latest round of planting that includes 34 counties. The program has been helping reintroduce the native plants since 1988. “We’ve provided seed to 82 different counties and we’ve planted native vegetation in over 15,000 acres of Iowa county roadsides. And we’ve got a total of 75,000 acres of Iowa county roadsides total. So we’ve got a ways to go. We’ve got a lot to do,” Kauten says.

Those acres were planted with 12,460 pounds of native grass and wildflower seed. The program is open to any of Iowa’s 99 counties that have an integrated roadside vegetation management program. Kauten says all the counties have to do is express interest and they can get seed.