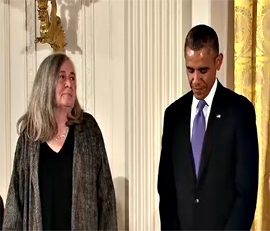 Marilynne Robinson with President Barack Obama at the award presentation.

An author from Iowa City who won the 2005 Pulitzer Prize for her novel, “Gilead,” was honored at the White House Wednesday afternoon. Marilynne Robinson was among those who received a National Humanities Medal from President Obama.

“Frankly this is just fun for me because I feel like I know y’all, because I’ve enjoyed your performances. Your writings have changed me — I think for the better,” Obama said, before saying to to the Iowa author: “Marilynne, I believe that.”

Robinson is a professor at the University of Iowa Writers Workshop and she has lived in Iowa City about 20 years. Filmmaker George Lucas, writer Joan Didion and sportswriter Frank Deford were among the others honored along with Robinson.

“So many of you have touched me and touched Michelle and now we’re trying to get Malia and Sasha to…read ‘Gilead’ because we want to share that, because we think it was important to us,” Obama said. “We celebrate people like our honorees here today not just because of their talent, but because they create something new. They create a new space and that becomes a lasting contribution to American life.”

Robinson’s “Gilead” was published in 2004. It’s the fictional story of an elderly pastor in a small town Iowa. The book won the 2005 Pulitzer Prize for Fiction. A military officer read the citation written for Robinson’s 2012 National Humanities Award during yesterday’s White House ceremony: “With moral strength and lyrical clarity, Dr. Robinson’s novels and non-fiction have traced our ethical connections to people in our lives, explored the world we inhabit and defined universal truths about what it means to be human.”

Much of Robinson’s published work has been in non-fiction, including theology, but she’s written three highly acclaimed novels. “Home” — her most recent novel — was published in 2008 and received the Orange Prize for Fiction, one of Great Britain’s highest awards for female authors. Robinson’s first novel was titled “Housekeeping” and it won the Hemingway Foundation/PEN Award for best first novel.

Robinson talked about her work during this interview with The Paris Review.  Her 2011 “The Workshop as Phenomenon” speech in Iowa City is posted on youtube. Robinson is the author of a 2011 piece about the Bible published in The New York Times Sunday Book Review.