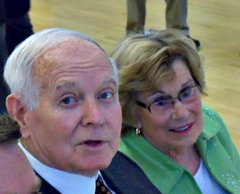 The Iowa Department of Cultural Affairs and Drake University in Des Moines are working together to make the papers of five-term Governor Robert Ray available to the public in a digital format.

“We have about a-thousand boxes of his official papers, in addition to about 40 of his personal papers, which are all currently here in this building. This collaborative initiative between Drake and DCA will allow a significant portion of his papers to be on loan and accessible at Drake. Most importantly, the papers will begin to be digitized,” Cownie says.

Drake is creating a center on the second floor of its library where the records will be digitized and also available for viewing. Ray is a 1952 graduate of Drake who was elected governor in 1968, serving until 1983.

Cownie says Ray donated his papers to the state in August of last year and they have just completed the process of processing them and are now ready to move the typed and handwritten papers into digital form. “As Governor Ray once said ‘we do not own or control our own history, we are merely its stewards,'” Cownie says.

“With the DCA and Drake forming this strategic partnership, we are ensuring together we can be a better steward of our history — history made under governor Ray — and we look forward to starting down this path.” Deputy State Archivist, Jeffery Dawson, help process the official papers from Ray’s years in office.

“You see lots of discussions of policy, you see matters that were of concern to citizens, matters that were of concern to Governor Ray, being raised as this is what we want to do. You’ll see a lot of administrative matters. You have lots of criminals for example, seeking restoration of citizenship, executive clemency and so forth,” Dawson explains.

Dawson says there are some topics that will be important to historical researchers. “I know of particular interest to many people are the refugee resettlement initiatives in the 1970’s and early 80’s,” Dawson explains. “We’ve had people look at these records for example.”

Ray left the governor’s office in 1983 and was succeed by current Governor Terry Branstad who was also on hand Tuesday. Ray went on to become an insurance executive and serve stints as President of Drake University and interim Mayor of Des Moines. He has won numerous awards, including the Iowa Award, the state’s highest citizen award.

Ray will turn 85 in September and did not speak at the event announcing the project — but he joked with reporters when one asked him if there were any great “President Nixon like” secrets among his papers.

“No, but I was going to call you as ask you what you know,” Ray said, getting a laugh from reporters. Ray said there are likely some papers that include correspondences with the most powerful men in the country, but he admitted that they may not be that exciting.

“I was looking at a photo album the other day, I’ve got picture so Ronald Reagen, Jimmy Carter and Bill Clinton. So, I’ve had conversations with all of them,” Ray said, “but that doesn’t mean they are of value or substance.”

Ray was accompanied by his wife and former First Lady Billie. They have three daughters and eight grandchildren.