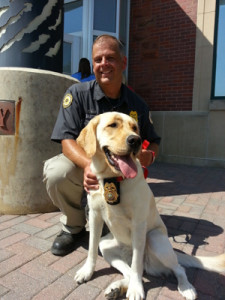 The Iowa State Fire Marshal’s office has added a four-legged tool to help with the fight against arson.

Pogo is a two-year-old female dog that’s trained to sniff accelerants. Her handler is Jeff Shatzer. He says Pogo can sniff through an entire building in a matter of minutes, while it could take an investigator several hours just to dig through the debris of one room.

Shatzer lives in Mount Pleasant, but he and Pogo — who’s part-Lab, part-Golden Retriever — could be called to fire investigations statewide.

“She is the only arson dog that our office has, so I could potentially travel anywhere in the state,” Shatzer says. He and Pogo were introduced to the media today outside the Iowa Department of Public Safety headquarters in Des Moines.

Iowa State Fire Marshal Ray Reynolds says in 2012, arson was the second leading cause of fires in Iowa. Those fires caused about $35 million in property damage.

“That’s why the Department of Public Safety has taken a much more aggressive stance in going after arsonists in our state,” Reynolds said. The purchase of Pogo was made possible by a program operated by State Farm Insurance, which — since 1993 — has placed 300 dogs with fire and law enforcement agencies in the U.S. and Canada.

Reynolds said Pogo is the first of potentially several dogs that will be given to the State Fire Marshal’s office to help solve cases of arson.