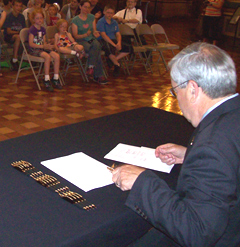 Over 100 home schooling parents and their children gathered at the statehouse Thursday to watch Governor Terry Branstad stage a reenactment of a bill signing — for the education reform bill that includes new freedoms for home schoolers.

Justin LaVan — the president of the Network of Iowa Christian Home Educators — called the changes “historic.”

“There was a number of issues in figuring out how do we home school and how do we meet the requirements of the laws of the State of Iowa. Well, I’m here today to tell you that those barriers are gone,” he said and the crowd applauded.

Bill Gustoff, the legislative liaison for the Iowa Network of Christian Home Educators, spoke of how home schooling became legal in Iowa 22 years ago.

“Now we’ve come a long way from hiding in the shadows and avoiding the mailman and not going out in public during the daytime to making home schooling almost — almost — mainstream,” Gustoff said, with a laugh.

The 2013 legislation that is now law in Iowa eliminates the paperwork home schooling parents have had to submit to their local public school. That’s a welcome move to Stuart Schwenke of Oelwein. 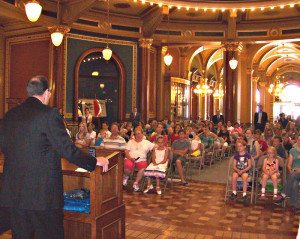 “Just the ability for us to home school our children without sharing all of the jot and tittles with the Department of Education is a huge step,” he said after the bill signing ceremony.

Schwenke and his wife are home schooling their two children, a seventh grader and a fifth grader.

“We came from Minnesota where the freedoms in Minnesota for home schooling were far greater than they were in Iowa. We’re not there yet, but we’re a lot closer to Minnesota’s home schooling (law), so we’re very happy today,” Schwenke said.

AUDIO of reenactment of bill signing ceremony for SF 215, runs 18:38