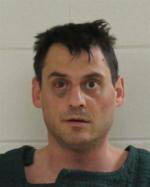 A longtime restaurateur in Mason City is dead — and his son is charged in the murder. Forty-two-year-old Thomas Barlas Junior was arrested outside the residence of his parents last night.

Lt. Frank Stearns of the Mason City Police Department says in a statement that officers were called at around 8:45 last night to the scene of the incident, where they found 73-year-old Thomas Barlas Senior dead. No cause of death or any other details of the incident have been released.

According to the Cerro Gordo County Sheriff’s Department online jail roster, Barlas is being held on $100,000 bond.