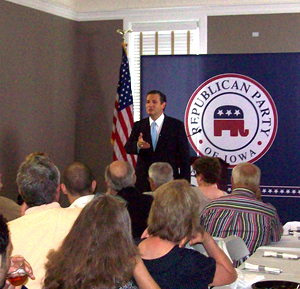 “I’ve been in office all of seven months. Prior to that the last elected office I held was student council, It has been quite the whirlwind,” Cruz told reporters this afternoon.

During a news conference in Des Moines, however, Cruz sidestepped questions about whether he’s thinking seriously about running for president in 2016.

“We just had a presidential race a few months ago. I’ll tell you as a voter, I think it’s premature to decide who we should support and I’ll tell you for me as a citizen and a voter who I will support in 2016 is whoever is standing up and leading…whoever is effectively making the argument to the American people that there is another road that we can go down,” he said.

Cruz told a luncheon crowd of about 50 Iowa Republicans that the U.S. Senate is now “the battlefield” in the effort to “defund” ObamaCare and abolish the Internal Revenue Service.

“The way we get this done is the American people stand together,” he said. “We come together as grassroots activists and we demand of our elected officials…Stop talking. Start acting.”

Cruz’s first stop in Iowa was at a private conference for over 650 pastors where Cruz gave a passionate speech. His father, a Cuban immigrant who is a circuit preacher in Texas, sat in the crowd. Rafael Cruz said his son “has been true to his principles” during his first six months in the U.S. Senate. The elder Cruz won’t speculate on the possibility his son may run for president in 2016.

“He has his hands full in the Senate right now and that’s his focus,” Rafael Cruz said. “The future is in God’s hands.”

“Ted, Ted, come on out,” they chanted at one point. “See what Iowa’s all about.”

The protestors main complaint against Cruz was his vote in the U.S. Senate against comprehensive immigration reform.