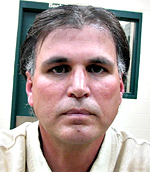 A former eastern Iowa policeman has been arrested and charged with sexually assaulting a woman in a hotel this past February.

Forty-six-year-old Thomas Andrew Tovar, a Muscatine policeman at the time, helped stop a vehicle on February 13. An adult woman in the vehicle was drunk. Tovar drove her to a hotel.

According to a news release from the Iowa Department of Public Safety, the woman doesn’t remember being driven to the hotel, but “she does remember a male” in “uniform-like material” being on top” of her in the hotel room’s bed.

When a friend of the woman got to the hotel, the woman was “lying on the bed in a fetal position with no clothes on.” State agents joined the investigation. After “an analysis of physical evidence” was completed, Tovar was charged with third degree sexual assault.

Under Iowa law, a person is guilty of third degree sexual assault if the other person is under the influence of a controlled substance or is incapacitated and cannot give consent. If found guilty, Tovar could be sentenced to up to 10 years in prison and fined up to $10,000.

Photo courtesy of the IDPS