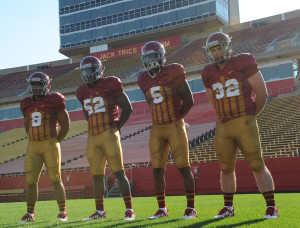 The Iowa State Athletic Department says the football team will wear throwback uniforms during the game with Iowa on September 14th in Ames.

Marketing director, Mary Pink, says the uniforms will go all the way back to the 1920’s.

“They’ll look like the uniforms from the Jack Trice era…they will be cardinal jerseys with five stripes and a white number. And then they will have gold pants and then striped cardinal and gold socks to complete the uniform,” Pink says.

They uniforms will be topped off with the cardinal helmets and just numbers on the side instead of the current ISU logo.

Trice was the first African-American player in Cyclone history, and the football stadium is named in his honor. He played in two games at Iowa State and died from injuries suffered in a game at Minnesota during the 1923 season. Pink says they researched the equipment Trice wore 90 years ago.

“We had to look at pictures of what were worn during that era and look at trying to match them as closely as we could. We went through many different designs to accurately depict what the jerseys and the pants would have looked like,” Pink explains. Fans will be able to bid in an online auction at www.Cyclones.com to buy the uniforms. 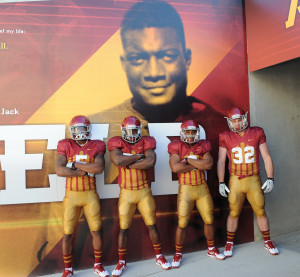 The first round of bidding starts this Friday, August ninth. She says the auction will feature over 100 uniforms and each period Friday to Friday they will give fans a chance to bid on the uniforms.

The starting bid for the uniforms is $250, which is the base cost of the uniform.

Pink says the auction lets fans have a great piece of memorabilia. “These are the actual game-worn jerseys and pants,” Pink says. The only other time that Iowa State players wore a throwback uniforms was in 2007 against Iowa.

Those uniforms honored the 1977 Cyclone team and commemorated the 30-year anniversary of the school’s Peach Bowl appearance. The Cyclones defeated Iowa, 15-13 in that game.

The Cyclones will hold their annual media day on August 11th, and they open the season August 31st against Northern Iowa.