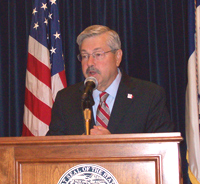 Nearly a dozen members of Iowa Citizens for Community Improvement crowded into the governor’s outer office today to protest his handling of clean water regulations.

Retired school teacher Cherie Mortice — a member of the group — argued it’s wrong for Branstad to involve certain farm groups in the private negotiations between the state and federal officials.

“He’s representing the interests of the Farm Bureau and corporate ag, not everyday folks,” she told reporters.

“We’re trying to do this throughout all of state government,” Branstad told reporters this morning. “We’re trying to change the culture from kind of a ‘gotcha thing’ to more of a how do we work together to really protect the environment.”

Mortice and other members of Iowa Citizens for Community Improvement contend Branstad is kowtowing to corporate agriculture.

“I actually spent some time, about 10 years, in a hog confinement operation. I know it’s unsustainable and I also know what’s going on out there right now,” Mortice said. “They’re not inspecting. They’re not enforcing the Clean Water Act.”

Branstad said it would be inappropriate to include Iowa Citizens for Community Improvement in the private discussions with the EPA.

“They are suing the state of Iowa and I think they’re suing the EPA and now they want to be in on the discussions on this,” Branstad told reporters. “You know, you can’t have it both ways. If they wanted to be cooperative and collaborative and to be helpful in solving problems — that’s one thing, but they just want to create a scene.”

David Goodner, a spokesman for Iowa Citizens for Community Improvement, said the group has not filed a lawsuit, they only threatened to sue the federal government in 2011 if the EPA didn’t step in and do something about water quality in Iowa.

According to Goodner, the threat of their lawsuit is what lead to the negotiations that are now underway between state and federal environmental officials.

Critics say ag run-off is creating water quality issues in the Gulf of Mexico. Des Moines Water Works officials say due to historically high levels of nitrates in river water they had to use expensive filtration equipment and even switch to a back-up reservoir to provide drinking water that met Clean Water Act standards. A voluntary nitrate reduction plan has been developed by Iowa State University and state officials, but the U.S. Environmental Protection Agency has yet to endorse it as the answer.