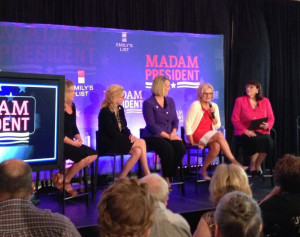 The first woman elected as a United States Senator from Missouri was in Iowa today to kick off an effort to elect a woman president.

“There is huge money that can be written behind closed doors and flood airwaves with distorted information,” McCaskill said. “The best antidote for that is a movement.”

According to McCaskill, “millions of people” will have to be “engaged and ready” for 2016 if Hillary runs.

“Getting everyone excited now about what I hope will be that moment in 2017 when we all get to say, ‘Madam President,’ to Hillary Rodham Clinton,” McCaskill said, to applause from the mostly female crowd.

McCaskill was one of four panelists at a forum organized by EMILY’s List, a political action committee that endorses Democratic women who support abortion rights. EMILY’s List president Stephanie Schriock cited the group’s recent polling of likely Iowa Democratic Caucus-goers which found 96 percent are willing to vote for a woman for president.

“We are so close here to making history,” Schriock said.

And Schriock said if Clinton doesn’t run in 2016, there are plenty of other well-qualified women who could.

Jessica Vanden Berg, manager of Christie Vilsack’s 2012 congressional campaign, predicted one of the three Iowa women who currently are candidates for congress are likely to win in 2014.

“We’re going to elect women before the presidential race starts, so nobody can come in here again and say that Iowans don’t elect women,” Vanden Berg said.

Vanden Berg told the crowd Christie Vilsack would be a member of congress today if she had run in Iowa’s third instead of the fourth district, which had a significant voter registration edge for Republican Congressman Steve King.