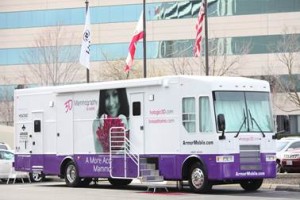 An Iowa doctor is touting the success of a relatively new piece of technology in the fight against breast cancer.

Dr. Jill Westercamp is the medical director of women’s imaging at Iowa Radiology, which has been combining 3-D mammography with more traditional digital screenings for a little over a year.

She says the 3-D mammogram, also called tomosynthesis, is much more precise and allows doctors to examine breast tissue one layer at a time.

“The 3D has the benefit over the 2D in that you’re able to look through each little slice of the breast in two different views,” Westercamp says. “Normally, (in a two-dimensional image), all of the tissue is compressed upon itself. By doing the tomosynthesis, we’re able to separate out those layers of the breast.” Iowa Radiology offers the breast tomosynthesis technology at all five of its locations in the Des Moines area.

Patients can choose from a traditional digital mammogram or opt for the mammogram with tomosynthesis for an additional $40 fee. Westercamp believes it will eventually become the industry standard for mammography. “Right now, a lot of the problem is insurance companies haven’t quite bought in to this new technology,” Westercamp says.

“But, every time we get new technology it always takes them…there’s a lag time. They need to kind of catch up to the standard, but I think this is definitely a new technology that’s here to stay and will only improve with time.” Because the traditional, two-dimensional picture of the breast makes it difficult for a doctor to see subtle signs of early cancer – patients are often called back for further exams.

Iowa Radiology is reporting a nearly 55% reduction in recall rates with the 3D imaging compared to the traditional mammography. And, Westercamp says there’s another benefit – they’re find smaller cancers sooner. “We’re finding these cancers earlier and smaller than we were able to detect,” Westercamp says.

“I’ve seen a number of cancers that we can only see with the 3D technology. Because we get both images when we do an exam, I go back and look at the 2D images and I cannot see it there at all, but when I look on 3D, we’re finding them.” A manufacturer of the breast tomosynthesis technology has sent a large mobile coach on a cross country tour.

The vehicle, which houses a 3D mammography system, will make a tour stop at Iowa Radiology in Clive this afternoon from 3:30-5:00.