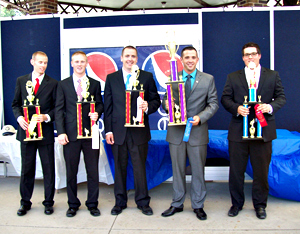 Twenty professional fast-talkers competed today on the Iowa State Fairgrounds for the title of champion auctioneer.

“There’s not an experience like it. I was just excited,” Runge said after his win.

“So many of these guys are my good friends, especially the ones that were standing up there and we’re all in the same boat. It’s just who’s going to get lucky on a certain day. I’m the lucky one that got to win today.”

Each contestant auctioned off three items to a crowd gathered around the Bill Riley Stage on the fairgrounds, then each of the five finalists managed another round of bidding before the champion was chosen. Like many of the competitors, Runge learned the cadence of the trade at an early age.

“I’m a third-generation auctioneer. My grandpa Runge — August Runge, Junior — was the first person I heard when I was really young. We used to go to sales and dad would always drag me along,” Runge said.

“I like a good, smooth, rhythmic chant. I like a good voice and somebody that can move the sale along,” Huff told Radio Iowa. “All five of these finalists are good bid callers. They’re all young and we’ve got a lot of talent in the auction industry in the state of Iowa right now.”

Huff, who has been an auctioneer for 31 years, was one of four “ringmen” for the contest.

“The ringman is an integral part of the auction process, spotting the bids and keeping the crowd motivated,” Huff said.

The ringmen are the people who shout words like “ho” or “hup” to indicate a bid has been made, putting some staccatos in the auctioneer’s chatter.

Two of the 20 competitors were women and Megan McCurdy of Wichita, Kansas — the 2013 International Women’s Division Auctioneering champion — was one of the five judges.

“The days of it being a man’s business only are far behind us,” she told Radio Iowa.

In 2007 the first woman won the Iowa State Auctioneering Bid Contest. After someone wins the Iowa title, they are not allowed to enter the contest again, but for the following year they’re to be a sort of ambassador for the profession. Runge is ready for the assignment.

“Especially with all the talented and good auctioneers here it’s truly just a privilege and an honor to be standing here and it just means the world to me,” Runge said. “It really does.”

AUDIO of Runge’s appearance in finalists’ round, 5:42