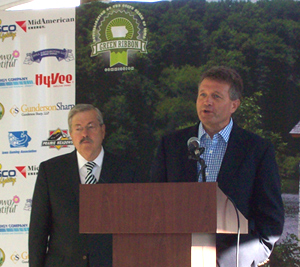 “We’re trying to put this thing together so we can rock and roll into the next century,” says Bob Riley, co-chair of the commission.

The commission has reviewed the condition of state parks today and considered survey data about how Iowans might like the parks to look in 2020, when the state park system celebrates its 100 anniversary.

“We’re still in business. We have lasted this long and we can be strong again and be what our founders dreamed we could be,” Riley says. “We have listened and we will be bold.”

“By the time that we celebrate our state’s centennial of the first state park in the year 2020, we hope to show the rest of the country that Iowa was not only a pioneer in starting the state park system, that our parks are thriving” Branstad says, “and that we are ready to provide the education and the opportunity to enjoy the outdoors for future generations.”

During Branstad’s second term as governor, a $10-per-year “park user fee” was imposed, but after three and a half years, the fee was eliminated. Branstad says attendance at the parks declined when a user fee was charged.

“I do know in other states they do have user fees, but I think Iowans enjoy the fact they are free,” Branstad says. “And we found that by having a public-private partnership, we hope to make a lot of renovations and improvements.”

According to the governor, private donors will want to see how their investments in the park system is being managed and Branstad says that will increase use and support of the parks.

The Backbone State Park near Strawberry Point was the first park to open in Iowa, back in 1920. There are now 70 state parks and recreation areas in Iowa. Branstad and Riley made their comments this morning during a news conference on the fairgrounds, in the courtyard outside the Iowa Department of Natural Resources building.