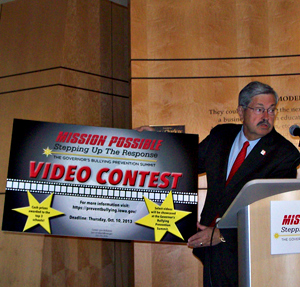 Governor Branstad holds a poster for the  video contest against bullying.

Governor Terry Branstad says bullying is a “pervasive problem” and he’s encouraging students, teachers and parents to attend the summit, which will be held November 4.

About 1,100 attended last year’s bullying prevention summit. Organizers have adopted the theme of “Mission Possible: Stepping up the Response” for this year’s gathering.

Branstad is hoping to build support among legislators for a bill that would give school officials greater authorities to police bullying outside of school, including on social media.

“I think we made significant progress in educating people about the need for additional action and sometimes on an issue that’s this complex and difficult it takes a while,” Branstad said. “I’m very hopeful that we can continue to work to perfect and improve the legislation.”

The bill failed to pass the 2012 Iowa legislature after some lawmakers expressed concern about free speech rights of students, and the rights of parents to oversee the actions of their children.

“We’re going to see what kind of input we get from the summit and what we’ve learned over the last year,” Branstad says. “…It is an important issue and one that needs to be addressed.”

The Iowa Hall of Pride is helping to promote the summit by sponsoring a video contest for all Iowa high schools, to highlight efforts to prevent bullying. Jack Lashier is director of the Hall of Pride, which also is sponsoring “Pride Academy” events to encourage students to “be a hero” and learn strategies to stop bullying in their schools.

According to the 2012 Iowa Youth Survey, 57-percent of students had been bullied at school within the previous month. Information about the video contest and registration for the summit can be found on this website.