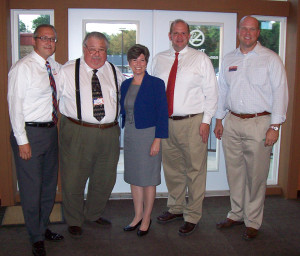 The five Republican candidates who’ve filed the federal paperwork to run for the U.S. Senate gathered in Greenfield tonight, with barbs aimed at Bruce Braley and other Democrats as well as “bystanders” within the GOP.

Sam Clovis, a former talk show host in Sioux City, was first to speak to the crowd of Adair County Republicans and he had a message for those who’ve been critical of this crop of candidates.

“I am sick and tired of people standing on the sidelines and barking and chirping and chipping about this race. Get in or shut up, one or the other,” Clovis said near the end of his speech.

Joni Ernst, a state senator who revealed last week that she carries a concealed weapon about 90 percent of the time, blasted Democrats for suggesting she was pushing the boundaries of safety.

“If a 22-year military veteran who has served in a combat zone and carried a 9 millimeter and an M-16 with her everyday is unsafe, I don’t know what they consider safe,” Ernst said.

Scott Schaben of Ames, the newest candidate in the race, presented himself as a more moderate candidate who could appeal to independent voters.

Matt Whitaker, a former U.S. Attorney, told the crowd it’s important for the GOP to pick a conservative as its nominee.

“We need a fiscal conservative,” Whitaker said. “We also need a social conservative…that will not just go to Washington, D.C. and not just vote with the leadership, but be part of the new movement to stand up what’s for the best interest of America.”

Whitaker has signed a pledge of support for rookie Republican Senators who trying to stop “ObamaCare” by threatening a government shut-down. Clovis has signed the pledge, too.

“I’ve seen Washington, D.C. and the beast of Washington up close and you know what? It’s as ugly there as it is here. You’ve got the right perspective,” Young said. “Sometimes it looks like one awful reality show when you watch the news.”

The five candidates had a private huddle after the event to talk about this Saturday’s Republican State Central Committee decision to push the date of the 2014 state convention back a month, from June 14th to July 12. If none of the senate candidates wins at least 35 percent in the June Primary, delegates to the state convention will choose the party’s nominee. Critics say the delay will give Bruce Braley, the only Democrat running for the U.S. Senate, another month to campaign without a direct GOP challenger.

Iowa GOP chairman A.J. Spiker told Radio Iowa this evening it is his hope the “timing doesn’t matter” and a senate nominee is chosen in the primary.

Spiker stressed that by state law, the “window” to conduct the official canvas of primary votes is 27 days and if none of the candidates crosses that 35 percent threshold, a June 14 state convention might be too early. Spiker says it’d cost tens of thousands of dollars more to hold a second state convention to nominate a senate candidate, plus some of the 4000 eligible delegates and alternate delegates might skip one of the two conventions.

The party’s state central committee voted unanimously on Saturday to move the date of the state convention to July 12 and the group voted to hold the convention in the central location of Polk County.