You are here: Home / Health / Medicine / Both sides of abortion issue gather for Board of Medicine hearing 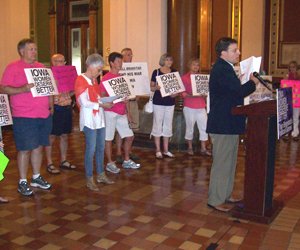 Matt Sinovic speaks inside the capitol.

The Iowa Board of Medicine is holding a three-and-a-half hour public hearing this afternoon over its proposal to ban so-called “tele-med” abortions in Iowa.

Doctors in Iowa would no longer be allowed to dispense abortion-inducing pills via a video-conferencing system. Supporters and opponents of the rule held separate events over the noon hour.

Opponents of the proposal rallied inside the statehouse. Matt Sinovic of Progress Iowa organized it.

“We are here today to call on Governor Branstad to stop his attacks on women’s health care,” Sinovic said,. “The governor is proving that politicians make lousy doctors.”

Midge Slater of the Iowa Alliance for Retired Americans offered an opening prayer. “Lord we gather today to address that violation of justice and to offer prayers for those who have been caught in this political posturing,” she prayed.

“We pray for women for whom pregnancy is not good news, that they know they have choices.” Two Democratic candidates for governor also spoke at the rally, denouncing the Board of Medicine’s rule. 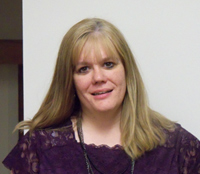 Iowa Right to Life is holding a couple of prayer vigils at churches near the state capitol. The group’s executive director, Jenifer Bowen, says their concern since the “tele-med” issue started has always been the health of the woman involved.

“That girl will take the chemical pill set in front of the computer screen and then she’ll go home and take the second set of pills alone, completing the abortion at home days later on her own. And so, she quite possibly will never see a doctor unless she has complications and seeks medical help after that,” Bowen says.

“..Obviously we are an organization that believes in the life of the unborn, but we are just as concerned for the safety of women in an issue like this.”  Bowen says it is disappointing that abortion supporters are ignoring the health of the women to push their own agenda.

“Making it all about abortion access, making it about politics, making it about a governor that they don’t agree with on the issue. Making it all about their ideology and not and not taking into fact that a woman — she may not be in a back alley like they purport has taken place tens of thousands of times in our history — but now the woman is left to deal with the blood and a dead baby on her own. That is not empowering women,” Bowen says.

Pastor Brent Fees offered a prayer for Bowen and others before they headed to the capitol to listen to the hearing. “Lord I pray for the events that are taking place today, this review by the Board of Medicine, that they would hear the spirits call to turn away from this,” Fees said.

The public hearing is set to last through this afternoon.