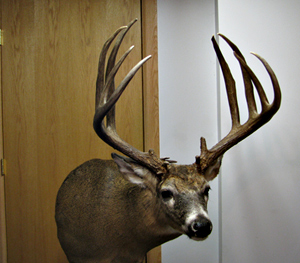 A Moravia man will have to pay $20,000 in damages after pleading guilty to taking a trophy whitetail deer in Appanoose County.

DNR conservation officer, Dallas Davis, says the investigation started after someone called the Turn in Poachers. or TIP  hotline on December 2nd of 2010.

Davis says they determined that 40-year-old Jerry Kaster shot the trophy buck while driving in his minivan close to Lake Rathbun.

“It’s not legal to discharge a rifle from the roadway or anywhere in the road right-of-way. At that particular time he was using a high-powered .270 rifle, there’s no season to take antlered deer or bucks at anytime (with the rifle), and at that particular time it was illegal,” Davis says.

Officers found the deer and the rifle at Kaster’s home a few miles from where the animal was killed. A bullet recovered from the deer matched the rifle.

Deer shed their antlers each year, and Davis says the past history of this deer is one of the reasons the damages assessed to Kaster are so high.

“We found a set of shed antlers that was determined to be from this same deer had been sold to a collector for about $8,000,” Davis says. Kaster was fined $195 each for unlawful killing of an antlered whitetail deer, and unlawful transportation of the deer.

The DNR also seized Kaster’s rifle and he will lose his hunting privileges. Davis says this case shows how important it is for people to report unlawful activity.

He says there are a couple of keys to help officers make a case. “If a person calls in a timely manner — immediately when they see something — and two, the tipline is set up to be anonymous and we’ve not had any trouble with that, but a lot of times it is helpful if the officers are able to talk to the person that is calling in,”Davis says.

He says you can call the tipline, but if you get the automated system, it is helpful to try and contact the local conservation officer to get them the details right away. Davis says you can do this and still remain anonymous.