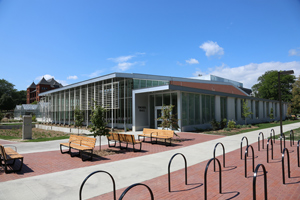 A dedication ceremony is scheduled for this afternoon for the newest building at Iowa State University in Ames.

Katie Baumgarn, Coordinator of Instructional Facilities at ISU, says the 400-seat Troxel Auditorium is a welcome addition to the campus.

“With the enrollment growth that we’ve had, specifically with some of our freshman level course in chemistry and biology…we were needing a space that would be able to accommodate 400 students,” Baumgarn says.

Troxel Hall is named for the building’s lead donor, Douglas Troxel, a 1967 ISU graduate who majored in mathematics. Baumgarn says the facility has many unique features, including two teaching stations at the front of the room.

Troxel Hall incorporates the latest in architectural sustainability, according to Baumgarn. The building has a green roof and the heating and cooling system shoots air from the floor instead of the ceiling.

“And there are some unique things we did as far as light shading, so that not a lot of heat is coming into the space, but the sun light is able to come in and give a nice feel to the space,” Baumgarn says. “We also have a rain garden that’s out in the front of the building, so when we do have rain, it collects the water and it’s going to water that garden in the front of the building.”

The total cost of the project was just over $11 million. The dedication for Troxel Auditorium, which is open to the public, is scheduled for 3 p.m.