You are here: Home / Human Interest / Steinway played by Vladimir Horowitz on tour in Iowa (audio) 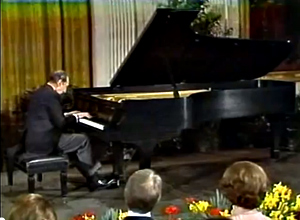 A  famous piano is back in Iowa on a three-city tour, as Radio Iowa’s Matt Kelley reports:  Audio  :41

The nine-foot-long ebony Steinway belonged to virtuoso Vladimir Horowitz. It’s the instrument he took with him on all of his international tours. Since he died in 1989, the concert grand piano has continued touring. Drake University music professor Nicholas Roth, and some of his students, are playing the piano tonight in a free concert in Des Moines.

“I don’t know exactly what we’re in for but I do know it will be a unique experience to feel the piano, in that the piano is regulated specifically to his liking,” Roth says.

Horowitz was known for his reclusive and eccentric lifestyle, and Roth says he was one of the greatest pianists of the 20th century. This piano is an example of the mindset.

“When he did travel, he took this piano with him, his CD503,” Roth says. “Horowitz didn’t want to take any chances. He had everything exactly the way he wanted it, so control was a big issue. He knew what to expect when he went out on a concert stage.” The public will also have a chance to see and play Horowitz’s personal Steinway, by appointment.

The piano will be making similar concert stops this month in the Quad Cities and Coralville. Tonight’s free concert starts at 5 P.M. at the Des Moines Civic Center.