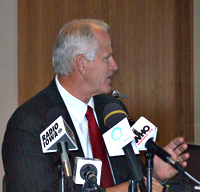 The man Governor Branstad has asked to “restore predictability and integrity” to the Iowa Department of Public Safety met with reporters this morning, stressing that he’s focused on the future rather than the past.

Public Safety Commissioner Larry Noble retired from the agency’s top job just over a year ago — only to return this past Wednesday morning.

“All I want to do is work as hard as I can,” Noble told reporters.

Noble takes over after the Tuesday evening resignation of Brian London, who held the job of state public safety commissioner for 11 months and who the governor says had sparked “significant controversy” during his brief tenure. 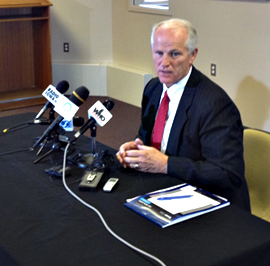 Noble is a 34-year veteran of the agency and he talked with the governor about returning “a week or so” ago — before London’s resignation was final.

“It’s truly an honor to work with the men and women of the department,” Noble said. “They’re the most dedicated people I’ve seen and I know and they do it from their heart. That’s the reason I wanted to work with them.”

Noble dismissed the idea he must boost morale among the agency’s 900 employees.

“There’s really no fixing to do because that’s how professional they are,” Noble told reporters. “They truly care about what they do.”

Noble said Larry Hedlund, the DCI agent who was fired after reporting the governor’s vehicle was speeding, “deserves and is entitled to due process” and Noble won’t comment on Hedlund’s lawsuit challenging his firing. Three other agency employees who were fired during the previous commissioner’s tenure have filed challenges.

“I don’t know the specifics of any of them cases, but I think they’ve being reviewed and vetted and they’re going through that same due process and that’s what needs to occur,” Noble told reporters. 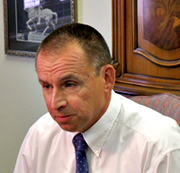 Noble left the agency last July to take care of his ailing mother and help his in-laws move, but Noble said his return is not temporary. He’s back now for good.

“I truly enjoyed retirement, but I loved this department and it was an honor to come back,” Noble said.

Noble faces an October 1 deadline to present an agency budget plan to the governor.

“I want to work on what I can do to help the department continue on with what we’re doing, what our objectives are and what our goals are,” Noble said, “and that’s trying to get more people out in the field to help the citizens.”

During his half-hour-long conversation with reporters, Noble refused to label the past 11 months as a period of “turmoil” for the agency.

Noble started in the agency in 1973 as an agent in the Division of Criminal Investigation and became a state trooper six years later. He left the agency shortly before he was elected to the state senate in 2006. Noble resigned from the senate in late 2010 and took over as state Public Safety Commissioner in January of 2011.