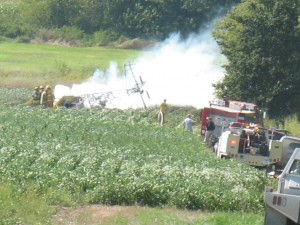 The pilot escaped this crash near Atlantic Friday.

The FAA is investigating a plane crash Friday in western Iowa that left a 24 year old Missouri man injured.

Chief Deputy Sheriff Bill Ayers said 24-year old Christopher Peeler, of Rock Port, Missouri, was flying a 1971 biplane seeding aircraft, when the plane suddenly went down at around 3:25 p.m. into a soybean field about four-miles west of Atlantic.

Peeler was able to make it out of the aircraft before flames consumed it. He walked with smoldering clothes up a dirt road to a nearby gravel road and caught a ride to the Atlantic Municipal Airport before being transported by another private vehicle to the Cass County Memorial Hospital in Atlantic.

A report on the man’s condition is not available, but Ayers said his injuries were not believed to be life threatening. The plane, registered to Shenandoah Flight Service and based in Atlantic, was a total loss.