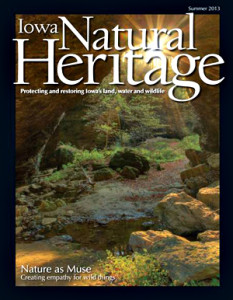 Iowans who enjoy taking photos of the outdoors can enter a contest to land their picture in next year’s winter issue of Iowa Natural Heritage magazine.

Laura Johnson is a spokesperson for the Iowa Natural Heritage Foundation (INHF). “They can submit up to five photos into our contest and we will be selecting at least one to be featured in the magazine, right now we’re planning on the back cover,” Johnson says.

The contest is open to anyone at least 18 year of age, except for employees of the Iowa Natural Heritage Foundation and their immediate family members. Johnson says the submitted images should depict Iowa’s land, water, or wildlife.

Entrants can upload their images to the INHF Facebook page (LINK: www.facebook.com/IowaNaturalHeritage ). The deadline for submissions is September 20. The finalists for the contest will be announced in October.

“And then we’ll be doing a public vote on Facebook,” Johnson says. “The grand prize winner and runners-up will be announced in early December.” According to the contest rules listed on the INHF website (LINK: http://www.inhf.org/2013_photocontest.cfm ), the judging panel will select approximately 10 photos as finalists for the vote on Facebook.

In addition to having their photo on the back cover of the magazine, the grand prize winner will get the opportunity to work with Ty Smedes, a recognized nature photographer, during a half-day shoot. The second, third and fourth place winners will receive a one year’s membership to Iowa Natural Heritage Foundation and have their photos featured inside the magazine.