You are here: Home / Business / Sioux City not yet seeing investment returned on downtown building 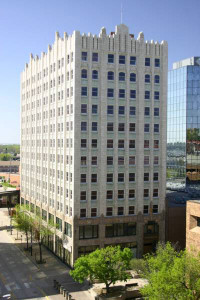 A building in downtown Sioux City remains empty, one year after city officials said it would be remodeled and house a data center by September 2013. Interim city manager Bob Padmore says the Badgerow Building’s developer, Bruce DeBolt and his California-based company Mako-One, are still trying to find a tenant.

“He’s still working his leads to try and get tenants in the building. At this time, he hasn’t asked for any additional resources from the city and we don’t anticipate that he will,” Padmore says. “It’s understandable, he’s got a rather sizable investment in the building and it’s in his best interest to get tenants. So, it’s not due to lack of effort on his part, I’m fairly sure.”

The city has invested $800,000 in the project, but Padmore says the city is collecting property taxes from Mako-One. “We have a minimum assessment that goes back to his original agreement with the city and they’re paying taxes based on that minimum assessment,” Padmore says. Figures provided by the city manager show that DeBolt’s company is paying $160,000 annually to the city in property taxes on the Badgerow Building.