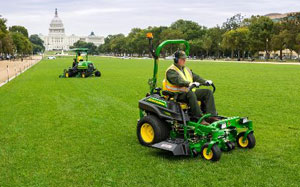 John Deere will soon have a very visible presence in our nation’s capital. The Trust for the National Mall announced Friday that the company will donate $400,000 worth of grounds care equipment to maintain the mall — which extends from the U.S. Capitol to the Washington Monument and Lincoln Memorial — and includes several war memorials. 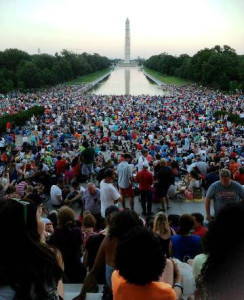 An event at the National Mall.

Caroline Cunningham, president of the Trust, says a  multi-year restoration project is underway for the more than 700-acre mall. “I think the American icon of the John Deere company taking  care of  America’s front yard was exactly what we were looking for in a partner,” Cunningham says.

She says they have been looking for the proper partners to help maintain the area. “As you know what’s going on in Washington right now and with federal budget cuts across the board — the National Mall has really seen a reduction in the revenue that they have to take care of this iconic space,” according to Cunningham.

Cunningham says the Trust approached Deere officials and they were eager to help. She says partnerships such as those with Deere are essential to maintaining the area. The National Mall hosts some 3,000 events and 25-million visitors every year.

Cunningham says the mall hosts more visitors each year than the Grand Canyon, Yellowstone, and Yosemite parks combined. The Trust for the National Mall is trying to raise a total of $350-million to restore the mall and add amenities.

Photos courtesy of the Trust for the National Mall.