The executive director of the Iowa Renewable Fuels Association (IRFA) took off for Washington, D.C. today and he’s dubbed the journey a “2,000 mile trek to truth for E-15.”Audio: Radio Iowa’s Pat Curtis reports. :58

Monte Shaw is driving a 2006 Jeep Commander, with over 97,000 miles on it, to the nation’s capital. It’s operating on E-15. Shaw says oil companies are using “bogus studies” to claim the gasoline blended with 15-percent ethanol is harmful to vehicles.

“Big oil went so far as to say E-15 could put motorists in harm’s way when vehicles break down in the middle of a busy highway,” Shaw said. “They’ve gone to policy makers and consumers and they’re trying to say, ‘look, your grandma and grandpa are going to be stranded on the side of the road and put in harm’s way.’ That’s just ridiculous.”

The IRFA conducted its own testing and found E-15 did not harm a vehicle’s motor as described by the oil industry’s study. “We showed that there was not a problem with E-15, there was a problem with big oil’s testing program. It was concocted to try and make E-15 look bad,” Shaw said. “It was political science, it was not sound science.” 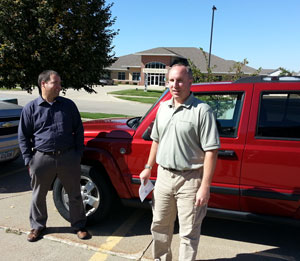 Monte Shaw (right) and Ben Gleason in front of the Jeep Shaw is driving to Washington, D.C.

The Jeep will arrive in Washington, D.C. on Thursday and Shaw plans to let members of Congress and the media take test drives around Capitol Hill. He hopes the trip will “show the fallacy of big oil’s attacks” on E-15.

“They will stop at nothing to try and control their market share. They will make fake tests…they basically design these things to fail and try to make a fuel look bad,” Shaw said. “But all you have to do is scratch the surface and you can see their claims do not hold up to reality and to the real world.”

Only eight retailers in Iowa are selling E-15, but Shaw says at least a couple dozen more are in the process of adding the fuel which is approved only for use in 2001 model year and later vehicles. “We’re optimistic that it’s just a matter of time before some of the bigger stations and chains look at the results of the sales that are out there and realize this is a fuel they need to put in front of my customers,” Shaw said.

Iowa is the nation’s number-one producer of ethanol with 41 plants in operation and three cellulosic ethanol plants under construction.