You are here: Home / Human Interest / Quilters from around the world descend on Des Moines 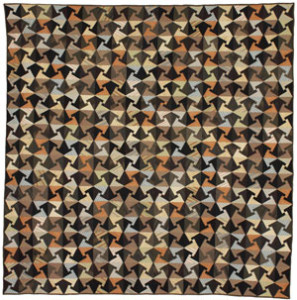 Thousands of quilt makers and admirers from across the country will be gathering in central Iowa starting today for QuiltWeek, an expo put on by the American Quilter’s Society. Bonnie Browning, executive show director, says there are several international quilting exhibits from as far away as Egypt, Germany and the Philippines, and other displays that will be right at home in a farm state like Iowa.

“Some of the special exhibits we’ll be having include a really fun one called The Cow Stampede,” Browning says. “You’ll see Moolattee and Cowifornia and Moochie Muncher. You’re going to have a good time walking through this very colorful exhibit.”

Browning, who’s originally from Muscatine, says nearly 1,700 quilts are being hung for this event, the largest-ever number for an AQS show. “We filled up the rest of the exhibit hall with vendors that have everything from quilts you can buy, antique and new, and all the products, fabric, batting, every sewing machine company,” she says. “If you’re in the market for a sewing machine, you need to come here and try them out. This is the place.”

Making a quilt can take a month or two, or two to three years depending on the size and method. While most of the attendees will be female, Browning says quilting is a hobby that’s embraced by members of both sexes. “We’re seeing more and more men getting involved in quilting,” Browning says. “We watch our YouTube channel which gives us a breakdown of men versus women. It used to be 2% or 3% men but the last report I got was that were 8% men.”

The four-day event is expected to draw up to 15,000 attendees. QuiltWeek is underway through Saturday at the Iowa Events Center in Des Moines. Also, the State Historical Museum of Iowa is opening a special quilting exhibit on Friday in Des Moines. It’s the North American premiere of “The Sum of Many Parts: 25 Quiltmakers in 21st-Century America.”

It features the works of 25 contemporary quilters from across the United States, including two from Iowa.