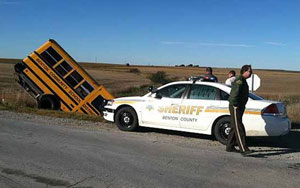 A school bus and another vehicle collided in eastern Iowa this morning. The crash happened on a rural road south of Van Horne around 8:30 a.m. The Benton County Sheriff’s office reports only one student was on board the bus at the time.

The student and both drivers were taken to a hospital, but none of the injuries appeared to be serious. The cause of the accident remains under investigation. The bus ended up nose first in a deep ditch.